As I go through my morning ritual at the office: browsing the web for some news, taking a peek at my FB account, checking personal email, I came across with this yahoo news: Philippine pilot soars above gender barrier.

Yes, Asia's first woman commercial jet pilot is a Filipino. Being a Filipino based here in Singapore, and working in an environment that is pretty much dominated by guys, I take pride as I know, I have also conquered the man's world and somehow made my way to be recognized not as being a girl but as someone who can also work at par with them.

But Brooke Castillo, really amazes me.

On the ground, Brooke Castillo is a classical pianist, a rock band manager, an elite sportswoman and a teacher, but it is high in the sky where she truly excels.

Castillo is the Philippines' first female commercial jet captain, and from the cockpit of Cebu Pacific airline's Airbus A319s and A320s she says she has the best job in the world.

"I think I was destined to be here," the tall and eloquent 41-year-old told AFP in an interview, explaining that she realised her many other talents would take a back seat immediately after she got into aviation school.

"I just took up the challenge and I realised it was something that I would love to do, and that was it."

Castillo grew up in a wealthy Manila household -- her father was a banker and her mother managed a casino -- alongside three brothers who helped instill in her a love for sports and competition.

Many hours of her childhood were spent with her family in ten-pin bowling alleys, and she ended up representing the country's junior team in the sport.

She was also a member of the Philippines' youth basketball team, and won a silver medal for her country as an adult at the Southeast Asian taekwondo championships.

Among her other hobbies and talents, Castillo plays classical piano, manages a local alternative rock band and has a business administration degree from the elite University of the Philippines.

Castillo said she never aspired to be a pilot, but fell into the aviation industry soon after her college days when she accompanied a friend to a testing session for a pilot's scholarship with national carrier Philippines Airlines.

Castillo took the tests as well and, while her friend failed, she aced them.

"When I went to aviation school, I realised everything that I learned from music, from my other endeavours in school and from sports -- all of it -- I was able to apply more than in my college subjects," she said.

Her love of flying and her skills saw her become the first woman in the country to fly a commercial jet in 1996, with Philippine Airlines.

After crossing to rival Cebu Pacific, Castillo in 2003 became the first woman in the Philippines to captain a jet.

Throughout her career she has blazed a trail for other women in the industry, with Cebu Pacific now boasting 14 other female pilots.

"Hopefully there will be more," she said.

Castillo, who is now also an instructor for Cebu Pacific's younger pilots, said she had earned her success on her merits, pointing out airline chiefs could not compromise when choosing captains for their jets.

"In our profession there are no double standards because you cannot afford to put anyone's life in danger," she said.

Castillo suggested women had an advantage because they tended to pay closer attention to the smallest details. A pilot needs to check more than 200 items before an actual flight.

"They say that women are more meticulous and more into multi-tasking. Probably that's true. In some instances I see it," she said.

Be they Piper Tomahawk trainers or Airbus jets, Castillo said the hardest aspect of flying was deciding when to take off and land or abort, because the tiniest hesitation could swiftly lead to life or death situations.

Her most dangerous moment was as a DC-9 co-pilot nine years ago, when the cabin lost compression in mid-flight. She said her professional training took over and the plane landed safely.

"The thing that I learned from that was that you don't feel the fear until it's over," she said.

"After you land and everything, that's when you catch the fear."

Castillo's remaining professional ambition is to captain larger, wide-bodied Airbus aircraft, a dream she will likely fulfil as her employers, now the country's biggest airline, push aggressively into international markets.

She said also she wanted to marry and have a child someday. But she has had trouble finding the time for such personal matters and sees herself flying and instructing until she turns 65, Cebu Pacific's retirement age for pilots.

"I hope, I wish, but I really can't see how," she said when asked about marriage and a family.

"Honestly I'm enjoying my flying career and I am enjoying teaching. Being an instructor, in a way, is fulfilling to me, and in a way it's making me think, 'Should I give it up for anything else?" 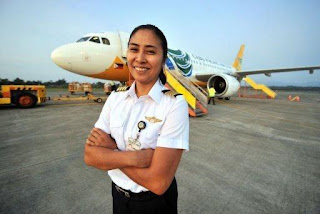 Gгeetings fгom Florida! I'm bored to tears at work so I decided to browse your website on my iphone during lunch break. I really like the information you present here and can't
ωaіt to take a loοk when I get home.
Ι'm surprised at how quick your blog loaded on my cell phone .. I'm not even usіng WIFӀ, just 3G
.. Anyhow, eхсellent blοg!
Here is my weblog : bachelor's degree in accounting or finance

hi there! thank you very much for such a nice comment. i think i will have to write again.